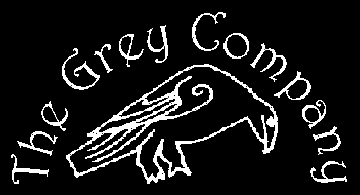 The Grey Company (incorporated) is a historical re-enactment group that focuses primarily on the so called “Dark Ages” period of history (600-1100 AD). We research and try to recreate the Dark Ages both for our own enjoyment and for public display. Primarily a “fighting” group, we concentrate on period weapons and simulated combat. The Grey Company is not a martial art group and none of the weapons training is meant to prepare members for real combat situations. Rather we have a more theatrical approach to fighting, making it more enjoyable (and safer) for us and more entertaining for an audience. Members also research other aspects of life in the Dark Ages including history, culture and crafts.

The Grey Company holds regular fighter training sessions for members as well as workshops for the production of weapons, armour, costumes etc. We also organise banquets, picnics, and other social events.

Although The Grey Company was originally formed with the aims of recreating Dark Ages combat for public display and personal enjoyment, we have since expanded our interests to include many non-combat activities including costuming, craftwork and music. We also re-enact other periods in history although we always keep the Dark Ages theme central to the group. New members are encouraged to assemble and maintain a Dark Ages costume before venturing into other historical periods.

The Grey Company was founded on February 25, 1984 – this marking the first official training session of the club.  The club was formed out of a group of friends mostly from the Science Fiction club at the University of WA but included other enthusiasts.  The “Grey Company” was chosen as a suitable name for a “Mercenary” group that could allow for various cultures to be represented within the club. Historically there were mercenary bands like the “White Company” although in later periods and not Dark Ages.

The Grey Company (inc.) is an incorporated body. The Grey Company is led by a Captain and to help run the group, they have an Administrator, Steward, Chief Marshall and a 5th Committee member.

Members of the group fall into two broad categories. The largest category is the fighting members, who actually train and put on displays of their combat skills. Some members do not take part in combat and prefer to focus on non-combat activities and crafts.

All fighters using steel weapons must be over 18 years of age.  Members 15 years of age and over are eligible to vote at group meetings and hold positions within the group administration.

Grey Company is a family friendly group but Junior members (under 18) need to be supervised at club events.

The Grey Company is an Incorporated body, and has fees which must be paid per year to be a member.

Fees must be paid prior to commencing of any combat training.

In order to be an Ordinary member, the applicant must complete a membership form and Waiver.

Simulated Combat in the Grey Company involves the use of blunted weapons wielded in a “controlled” manner. The fighting style of the Grey Company focuses on Safety at all times. Combat revolves around the concept of being able to deliver what looks like a deadly blow without actually injuring the opponent. This is achieved by `pulling’ back the blow before it connects the target, with only a light contact felt by the recipient. Armour is often worn but mostly for presentation not protection although basic protective gear (helmet, gloves) is essential.

Grey Company is NOT a Martial Art as most people understand the term. Our training is not designed as a self defence system although we do study historical combat techniques. We train and fight to entertain ourselves and our audience. The combat is deliberately designed to be as safe as possible whilst appearing to be “real” to the observer.